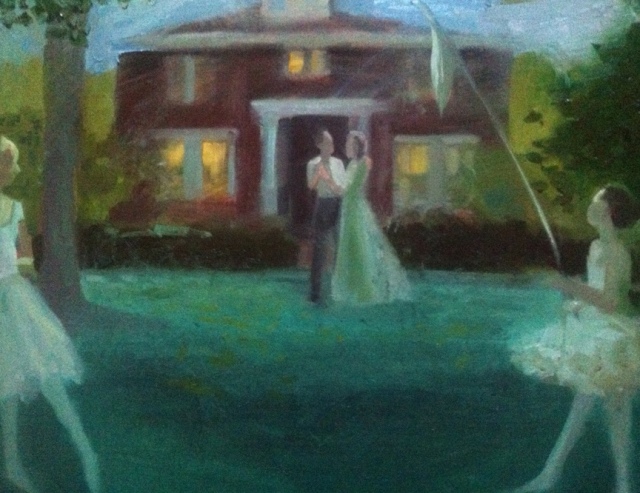 Stick around Indianapolis long enough and you will begin to understand just how much this city loves a parade.  Whether in honor of the “greatest spectacle in racing,” a longstanding football rivalry, or St. Patrick’s Day—if it can be celebrated, we will march it up the street.  And maybe that’s one reason why New Mexico native, Kyle Ragsdale and Indianapolis are such a perfect fit.  In Ragsdale’s latest exhibit, Tableaux, his paintings reveal a love of pageantry, gatherings of family and friends, and yes, parades.

This is a decided departure from recent work that often depicted men and women in
Victorian garb floating in air or hovering over a landscape.  These ethereal figures were ungrounded, shrouded in mystery and utterly detached from their environment.

In Tableaux, Ragsdale has costumed, propped and staged friends in settings very much informed by his interest in pageantry, parades and community gatherings.  It is easy to see how he has also drawn inspiration from his work in theater set design.  From photographs of these staged scenes, he creates a monochromatic underpainting in the grisaille style, though in bright, not the typical gray, colors, and then builds thick layers of rich color on top of the single-colored base.  The photographs also serve as a framework for the artist to then embellish with clothing and an assortment of unusual recurring props.

Ragsdale gives the audience just a bit of information about who the characters are, but leaves a sense of mystery and openness about how their stories will unfold.  Adding to the complexity of the narrative are the props that the central characters hold – poles, sticks and other undefined objects.  We want to know what purpose they serve, but are okay if the question remains unanswered, happy with the way they add to the feeling of fanfare that these paintings evoke.

The ambiguity that is present here feels familiar.  The difference is that these figures are very much grounded in place, in historic neighborhoods of Indianapolis, and featuring some recognizable landmarks, like this one which is set on Central Avenue in front of the Old Centrum.

Ragsdale, whose work often has underlying themes of community and connectedness,  enjoys a large and loyal following.  In addition to being one of Indianapolis’s most celebrated artists, Ragsdale also serves as the Harrison Center’s curator, a position he has held for more than a decade.

This entry was posted in Art, First Fridays. Bookmark the permalink.